The energy level at camp is over the top with excitement and enthusiasm.  Putting your heart and soul into everything you do inspires those around you and is the kind of environment we strive to create.

Summer camp is synonymous with trying new things and having the courage to step out of your comfort zone.  Our brave campers build backbone practicing sports they have never done before, doing challenging activities, tasting different cuisines, and simply pushing harder when tiredness and fatigue hold them back.

Sean Becker, an Italian-American who grew up in Rome, has spent half his life between London, Rome, Milan and the United States.

Stiles Anderson, an American from New Orleans, decided to put his career on hold and set out to travel the world, ultimately deciding to settle in Rome.

Their paths crossed in the Eternal City and besides being linked by a common ancestry, they shared a deep sense of adventure and wanderlust which had them travelling together across various countries experiencing new cultures.  With the world having embraced English as its de facto language of choice, Sean and Stiles felt fortunate and well suited to travel with greater ease and confidence.  Inspired by this sentiment they combined their skills and background to create something special.

A2Z s.r.l. started operating in October 2006 with the goal of opening to all its students the doors to a fuller and more international life by facilitating a deeper knowledge of the English language and Anglo-American culture.

Operating at first as an English language school for children under the name Alphabet Soup, it soon evolved into a full service English center catering to all groups and needs. Rebranded as Alphabet School, the methodology and objectives centered around the practical application of English in a real world context.

With this principle in mind, the summer of 2009 saw the launch of the first summer camp for students aged 6 to 12, creating a firsthand, full-immersion experience of Anglo-American culture. From the start the program was designed as an authentic American summer camp through sports, crafts, food, games, theatre and activities.

Since that time, more camp locations have been added and new programs developed to accommodate an ever-growing interest which fueled the launch in 2015 of Alphabet International Camps, the division that runs the summer camps. In 2016 our summer camps were approved for membership with the American Camp Association, a leading authority in youth development through the camp experience. 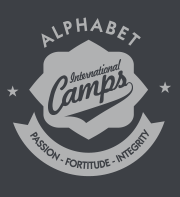